Christa Leighton
◀ Back to Coaches 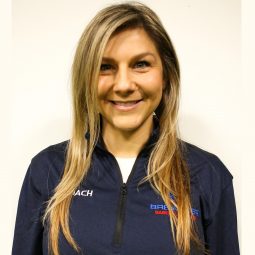 Christa is from Brewster, NY where she grew up surrounded by the game of baseball via her twin older brothers Brian, Kevin, and her father Dale.  She began playing softball as many children do, with tee-ball, and was quickly taken over by the complexity and challenge the game delivered.  Christa continued to play on Brewster’s All Star recreational teams that won the New York State title and went to the Junior Little League World Series in Kirkland, Washington coming in second place.

College:   As a catcher and third basemen, Christa received a scholarship to Division 1 Seton Hall University in the Big East Conference.  In 2005, she helped the pirates win a NCAA Conference Championship and attend the NCAA Regional Series.  She was Big East Academic All Star for three years and made the Dean’s list for the College of Education and Human Services. She graduated with a Master’s Degree in Special Education with honors.

Coaching:  Christa got into coaching softball and field hockey at Yorktown High School from 2011-2015.  In 2014, Christa was Coach of the Year for Section 1 Class A Varsity Softball and took the Huskers to Sectional playoffs.  In 2014, she was the keynote speaker for a softball coaches clinic in Connecticut.

Currently:  Christa is working as a Special Education teacher at Westlake Middle School in Thornwood, NY.  She continues to educate athletes on the Varsity level and during private lessons.